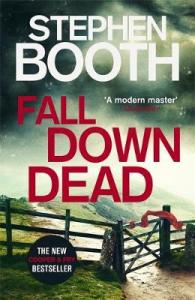 This feature is in association with NetGalley.

I’m a massive Stephen Booth fan and I know that this book was completed while the author was recovering from surgery. However, that doesn’t detract from the storyline or the character development. And I do think there is some character development in this story, particularly in the case of Diane Fry.

Ben Cooper is a DI in this book, and Diane Fry is a DS, so the roles are reversed from much earlier in their relationship to each other in the earlier books.

As well as the usual things that are going on in both of their lives, there are also two cases to investigate – a shooting that seems to be cut and dried, and a suspicious death (did she jump or was she pushed, or was it an accident?).

I’m accustomed to the characters, old and new, in the Cooper & Fry stories, and I love to read about the landscape and the location, both of which also play big parts in Booth’s stories. But I did find the chopping and changing from present day to flashback and back a bit confusing.

For example, it wasn’t always immediately clear if we were reading about what was happening “now” or what happened in the past, as there was a lot of “on that day”, which isn’t very specific and could be either/or.

I found the resolutions of both cases to be a bit vague. For example, the players suddenly decided who did the deed and how it was done for both the shooting and the fall without properly tying up the loose ends. I still don’t know who was responsible for the shooting, although it’s alluded to, and I have no idea how they came to their first conclusion about the falling case.

And I thought the mystery of the locked lock-up and the yellow box to be completely off the wall. It didn’t seem to have anything to do with anything else in the story.

I’ll continue reading about Cooper & Fry, though, as it’s a series I thoroughly enjoy.