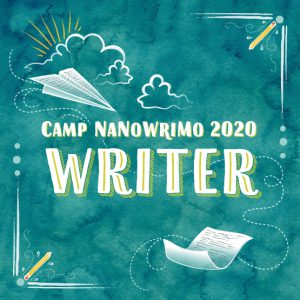 Yes, it’s started. And for the first time ever, I’m joining in with a Camp NaNoWriMo.

This should be a little easier than the usual NaNoWriMo, as there are 31 days in July as opposed to the 30 days in November. But this time I’m just writing on normal work days, so that’s weekdays only. If I get the urge to do more, then weekend writing will be a bonus.

Yesterday morning was all about prep work. (Mornings are my time.)

There are 23 working days in July and 20 working days in August, so my target is 42,780 words for July and 37,220 words for August, giving me an overall project goal of 80,000 words. (See below.) There’s a lot of new stuff going in as well as quite a lot of re-writing, but I’m starting the counter at zero.

I do like my visual prompts and motivations, so once I’d updated my NaNoWriMo project with the new cover and the goal for July, I grabbed the images for Facebook, Twitter and on here and saved them in my Camp NaNo folder.

Then I opened up my original Scrivener file for Catch the Rainbow (or the last one, at least), re-named it, and then saved all of the old stuff in a new folder in the binder called, rather imaginatively, “old”, and removed all of that content from the compiler and the word-count.

I changed the old cover image for the new one, then I opened up a new folder for each of my main or viewpoint characters. I kept the original pages because they’re formatted to exactly how I like them, and it saves a lot of extra work in the long run.

My biggest struggle with this story is where to put everything and in what order. So what I’m going to do this time is write each person’s individual scenes in their own folder in chronological order. Once I have all of the material, then I’ll start to re-arrange it.

I made a bit of a sneaky start by typing up the prologue and the beginning of the first of Woody’s scenes. This was so I could check that the compiler is still compiling everything as I want it to. The good news is that it is, and the even better news is that I’ve given myself a teensy-weensy bit of a head start. I’m such a cheat!

Then I went and grabbed the coding for our little man from Writertopia. Again, I’m starting him at zero but I’ll be updating him on the morning after the day I write. This will look as though I’m a day behind. But I’ve started to write my blog posts at the end of each day, scheduling them to automatically publish the following morning at 8am (excluding weekends and other non-work days).

The rest of the day was spent on a client proofreading job. It was also the last day of furlough for the poet, which was quite sad. I’ve got used to having his company over the past 4 months.