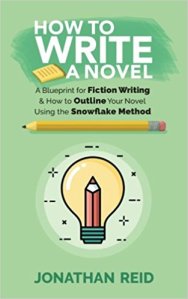 I set myself the goal of reading and reviewing 52 writing guides over the year. Here is book 25.

I was a tad disappointed with How to Write a Novel by Jonathan Reid. The sub-title reads: “a blueprint for fiction writing & how to outline your novel using the snowflake method“.

The snowflake method is still a mystery to me. I’ve read one or two books that mention it and started to read one that covers it in more detail. But it’s going right over my head.

Here, I thought, I’d found another solution to try, but there really is only one chapter on the snowflake method. The other chapters are:

The second chapter is “the snowflake method”, and I thought all the other chapters would build on this. But for me, they didn’t. And instead, I came away feeling even more confused than ever.

For example, I didn’t even realise it was a mathematical formula, and I’m not very mathematical at all. And then the book suggests that visual artists can draw a snowflake in four steps … but I want to write a snowflake …

People who like this kind of writing will no doubt enjoy the book very much. And I did enjoy the other chapters in their own right. I’m simply still none the wiser about the snowflake method.

I thought you wrote a sentence, then increased that to several sentences, then increased that to a paragraph, to a synopsis, to – eventually – a novel. I thought the outline just kept on growing until it became a novel. But here now, I find, I still have to write extensive character biographies after at first being told that this wasn’t necessary.

If you want to learn more about the snowflake method, then I don’t really think this book is for you. But as another tool for outlining, and creating characters, it’s great.

Find me on Reedsy